Has the Starburst Gummiburst Van come by your campus yet? Well, if not be on the lookout for a yellow van giving out the newest Starburst brand, “Gummiburst”! 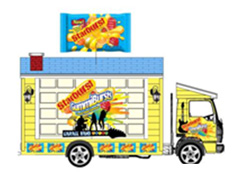 The Starburst Gummiburst movement will begin its tour in Boston and ending in Charlotte, North Carolina after visiting New York City, Philadelphia, Baltimore, San Antonio, Denver, Las Vegas, Los Angeles and San Diego before wrapping up in Raleigh around December. Some fun events will be surrounding the Gummi Tour.

At each stop, students will be invited to perform on the stage of the GummiBurst van with one of four virtual instruments, drums, guitar or bass, through the Microsoft Xbox console. Four large plasma screens will capture the action and participants will receive faux concert GummiBurst T-shirts.

I’m looking very forward to trying out the new Gummiburst because in general all Starburst candy has really juicy flavor which I love! They come in normal gummiburst and sour! Below is a picture of the bag. 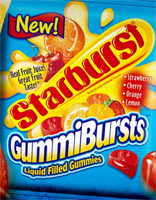